Week in the Life - Friday

Posted 17th October, 2008 in by Andrea
My "Week in the Life" is starting to feel like a month. Taking photos of everything you do is exhausting. That must be why I slept in today and didn't get dressed until 10:30am! Too tired from all this photo-recording.  Ramona mentioned that a friend of hers suggested doing this project every year during the same week.  I admit, that would be cool to see the changes, but I think every 5 years is good enough for me!  We'll see if I remember in October 2013.  Someone want to remind me of that?
Around dinner time tonight, I fizzled out, but I tried to come back with at least two pics from after Ayla's bedtime (which is when I usually fizzle out of my photo-taking frenzy).
So here's what Friday, October 17th looked like at our house: 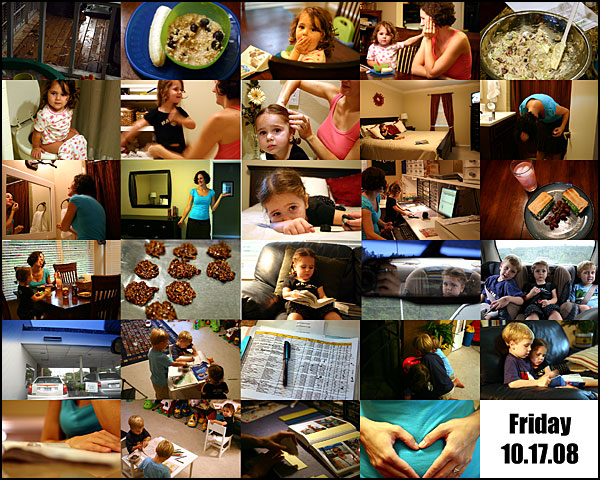 Week in the Life - Thursday

Posted 16th October, 2008 in by Andrea
So, today was a little harder to take photos, because it seemed to require a lot of setup.  I ended up carrying the camera on a tripod around the house while I cleaned.  Ben gave me several "you're crazy" looks as he passed me in the hallway.  Well, I suppose I deserve that, taking photos of myself dusting and folding laundry.  But, whatever, it's just for a week, right?
Oh, and a shout out to Josh & Rachel, who star in today's photographs since they offered to watch Ayla this afternoon, as well as to my friend Wendy who called and left a message this evening in the hopes of me taking a photo of myself talking to her on the phone. :) Maybe tomorrow Wendy!
Here's what Thursday, October 16th, 2008 looked like: 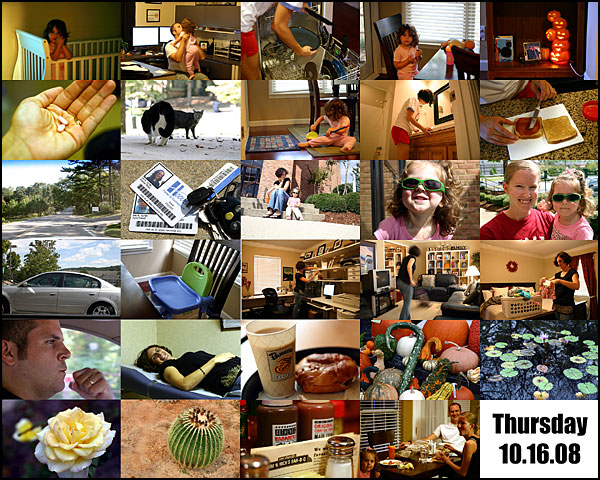 A Week in the Life - Wednesday

Posted 15th October, 2008 in by Andrea
Another day down in my Week in the Life project. It's getting easier to remember to take photos all day. And, as you can see, my collage keeps growing. I used up all my slots in my collage template today (original is 8" x 10" so I can print them easily later on), so tomorrow I'll have to be choosy!
Here's what Wednesday, October 15th, 2008 look like at my house: 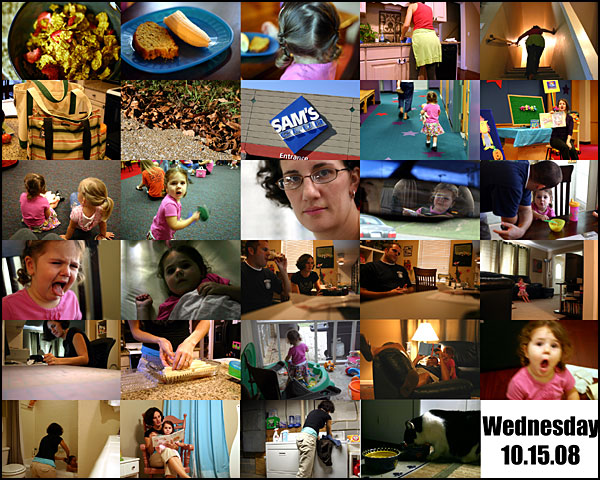 A Week in the Life - Tuesday

Posted 14th October, 2008 in by Andrea
Day two of my Week in the Life project inspired by Ali Edwards...I got better at taking photos all day long.  And Ayla seemed to think I should take a picture of everything!
Here's what Tuesday, October 14th, 2008 look like for us: 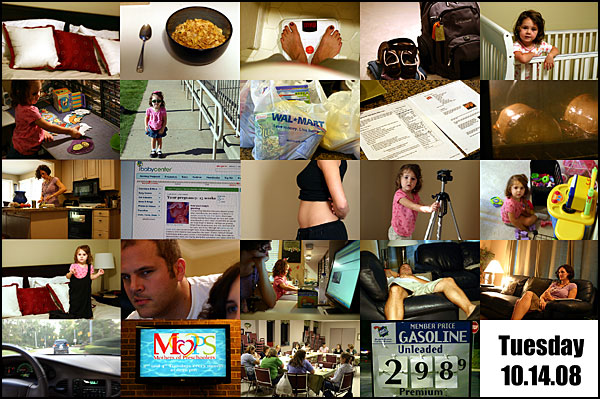 A Week in the Life - Monday

Posted 13th October, 2008 in by Andrea
I'm late to the party, but I'm jumping on board with Ali Edwards' challenge to document a week in my life. After seeing her album and everyone else's that participated, it inspired me to document a regular week in our life...no matter how boring it is! I may look back one day and dream of these laid-back days with only one kiddo.  I'm also writing a play-by-play of everyday, but I'll only bore you with the photos! :)
So here goes....Monday, October 13, 2008 looked a little like this: 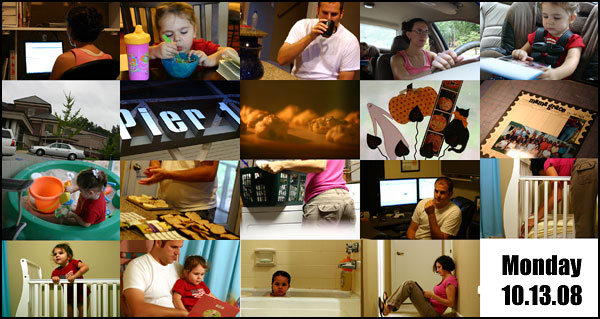 Posted 13th October, 2008 in by Andrea
Well, no, it doesn't really FEEL like fall (still SO hot here in Alabama), but at least it's starting to look that way.  I spent this afternoon making pumpkin-chocolate chip cookies (recipe courtesy of Heidi Swapp): 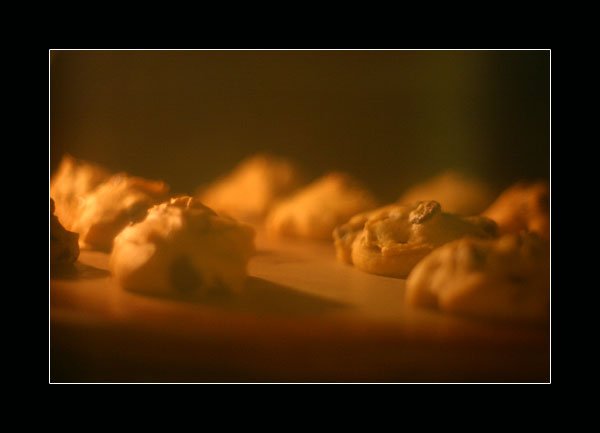 and these centerpieces/door prizes for my MOPS meeting tomorrow night: 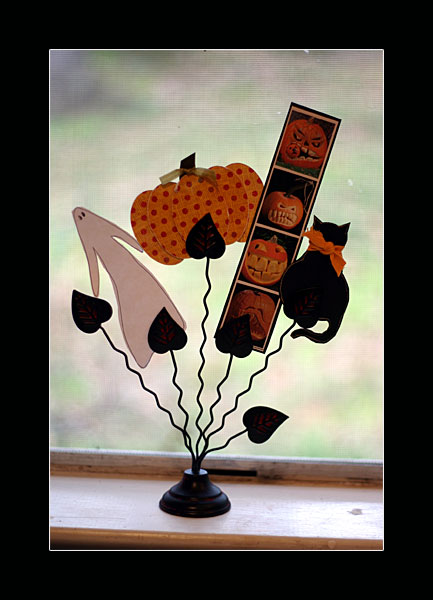 Found the photo stands at Pier 1 and gussied them up.  Our theme this month is "photo booth", so I thought a photo strip of pumpkins was appropriate until people are able to fill the slots with their own photos.
0

Posted 10th October, 2008 in by Andrea
This week, I've been a paper-piecing fool. Not because I like paper-piecing (because I don't really), but it seemed the most appropriate way to embellish my Disney photo album.
Instead of creaing a full scrapbook about our vacation (which could easily take me all year), I decided to use a 2-up photo album and just add in scrapbooked 4" x 6" cards to create titles, journaling, and embellishments mixed in with the photographs.
This week, I've been working on the cover, title page and sub-title pages (the album is divided by theme park). Since I might not get much farther for a while, I wanted to share my progress:
cover 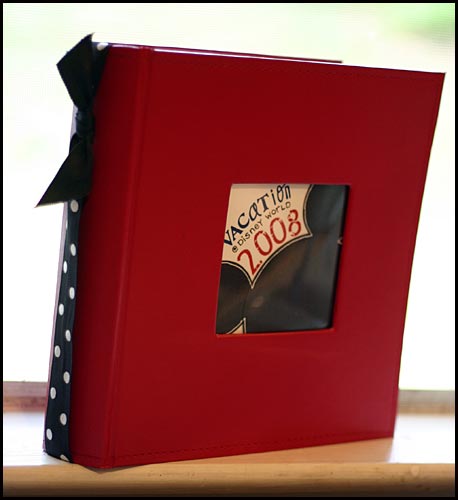 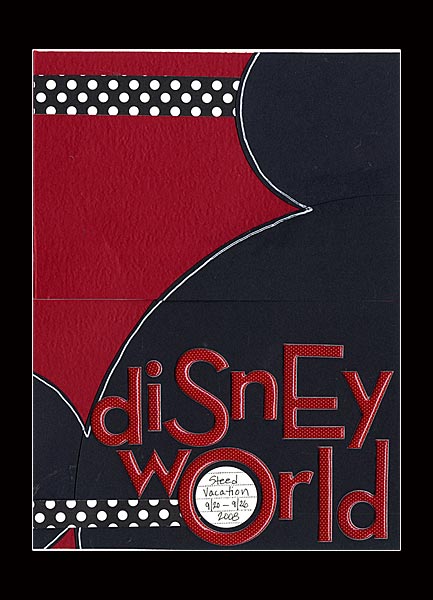 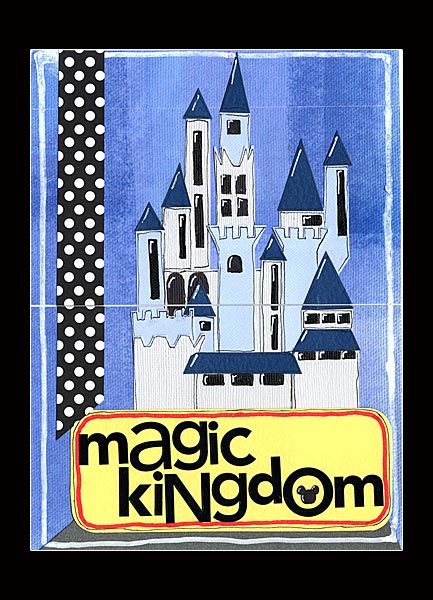 Here you can see how it's layed out in the book: 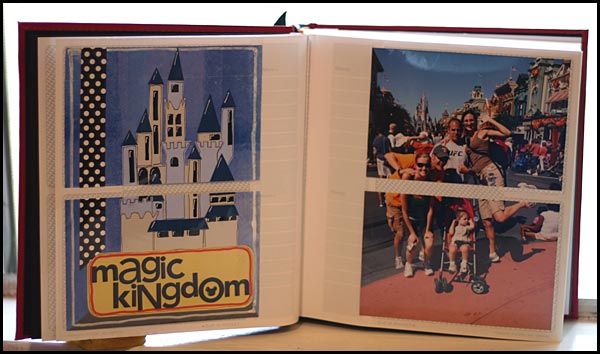 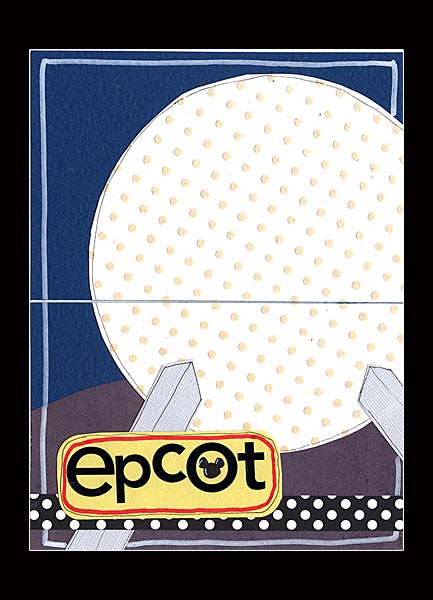 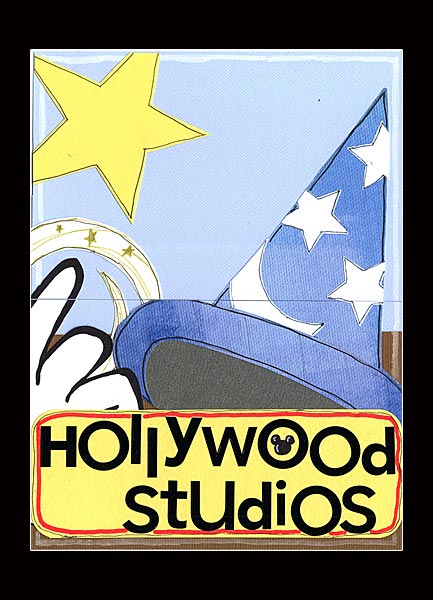 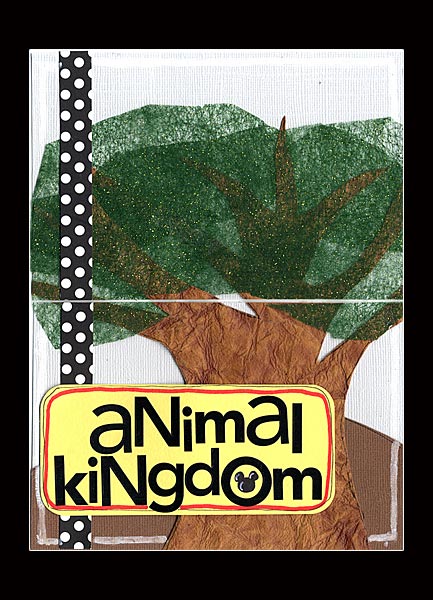 Now I need to go through and do several 4 x 6 journaling cards and embellishment cards and finish writing captions for the photos....haven't decided yet how I'm going to do all that, so it might sit a week or so while I think about it...
And finally, so that Ayla can look at the photos anytime she wants, I made her her very own Disney photo album that she has already spent hours pouring through and carrying around with her everywhere: 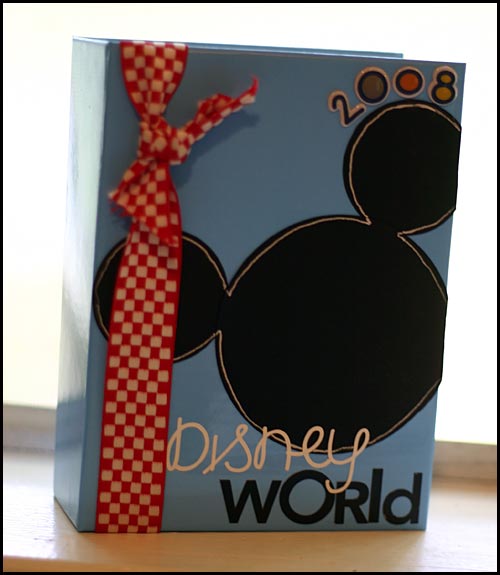 If you're looking for more Disney Album Ideas, Scrapjazz.com has several articles you might want to check out:
9

Posted 7th October, 2008 in by Andrea
Inside my freezer, you will find 6 prepared meals, ready to thaw, cook, and eat.  I spent about 4 hours this afternoon preparing 7 meals and freezing them for later.  (Well, one we ate and one is in the refrigerator for tomorrow...so I guess technically 5 are frozen). 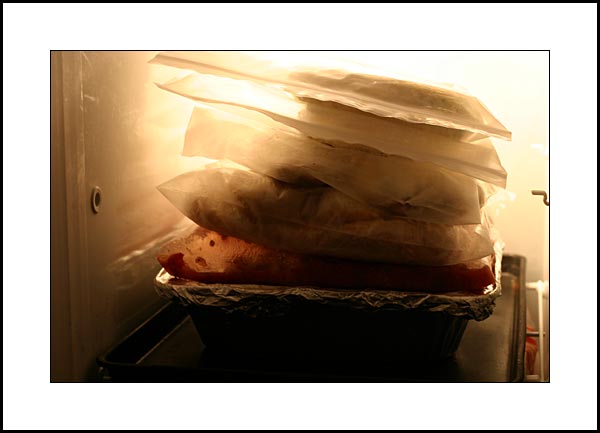 I'm testing out a few recipes from the book "Don't Panic - Dinner's in the Freezer".  A few years ago Ben and I bought a round of meals from Dish it Up in Rochester, which follows the same premise...spend one day preparing several meals, freeze them, thaw them and cook them when you're ready.  It's meant to help eliminate planning and prep time later on.  We weren't thrilled with the Dish it Up meals, but only because they were pretty bland and we like a little more spice and flavor in our meals.  Generally we liked having frozen meals ready to cook...as long as we remembered to thaw them in time!  So I decided to attempt the same thing on my own.
I don't know for sure yet that it's saved me much time, or money (because I didn't really buy all the chicken i used on sale...if there's a next time, I'll wait for a good sale first), but I'm really hoping that they'll taste great and I'll at least have some new recipes to throw into the mix.  I'm pretty tired of tacos, spaghetti, stir fry, and fajitas.  It seems like we've been eating the same things for 8 years.
I felt a little bit like a chef must feel in a restaurant, trying to juggle lots of orders and keep track of ingredients.  And BOY was it hot by the end of the day!  Although the verdict is out on the final product for each meal until we eat it, the prep time went reasonably well.  Only one meal looks like a disastrous mess.  I just hope it tastes better than it looks.  :)
On the menu (I'll try and post reviews as we eat them): 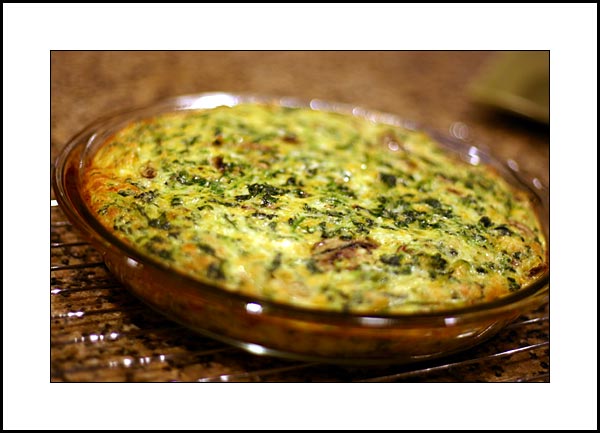 The Quiche was SO good and very easy to make.  So my first attempt at a new recipe (although not from the book and not really a freezer meal),  was a huge success.  Even Ayla ate spinach and mushrooms without realizing it. :)
So now I'm hot, tired, and need a bowl of ice cream. I think I burned a lot of brain calories today!
btw...the last time I was pregnant, I had a sudden domestic urge to cook too, which is very uncharacteristic of me. So I guess we'll all enjoy it (with the appropriate amount of trepidation) while we can!
11

Posted 29th September, 2008 in by Andrea
Saturday morning, Rachel and I went to get our haircut while we were in Auburn visiting. For whatever reason, we both found a hairdresser we like there, so anytime we're in Auburn, we go back to her. I haven't even bothered looking for someone in Birmingham.
I decided I was tired of my ponytail and ready to give it away and start over....so I donated 10" of hair to Locks of Love. This is the second time I've done it. I donated 10" about 3 1/2 years ago as well.
I figured that while I'm pregnant and taking pre-natal vitamins it was a great time to get it all cut off...because it'll grow back pretty fast. I'm loving my new haircut, and I don't miss the ponytail at all.
She had to straigten it the day I cut it to make sure it was all even and cut correctly, but I'm not thrilled with the "after" photographs here. It looked better to me in the mirror than these photographs portray: It looks too mushroom-y. I probably won't wear it THIS straight unless I'm flipping the bottom out, instead of in. 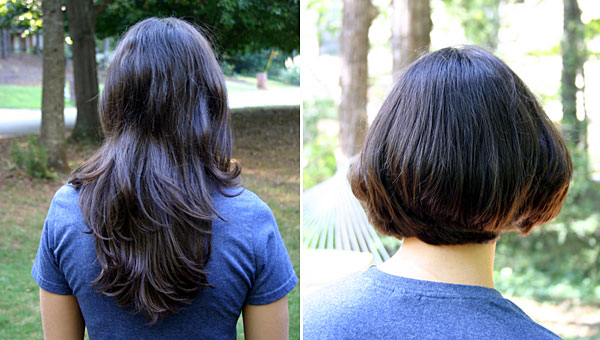 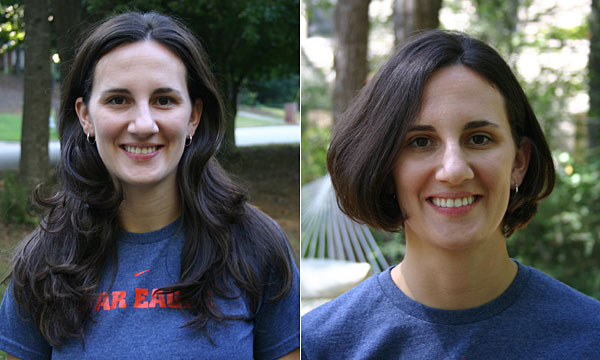 However, I DO like the curly version and will likely wear it this way most of the time because it's SO easy: 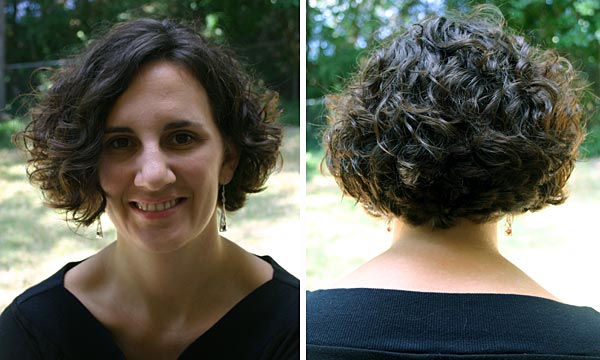 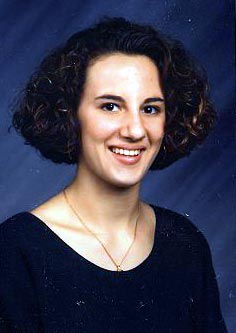 Ben used to carry this photo of me in the dashboard of his car. Guess it's a style he liked. :)
4

After a great week at Disney World, and lots of fun taking photos, these are my favorite "artsy" pics from the week: 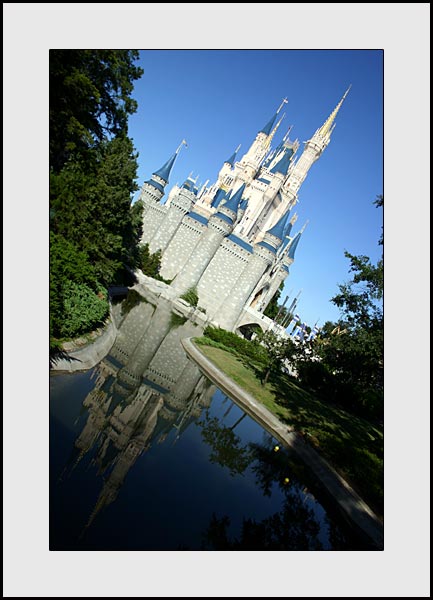 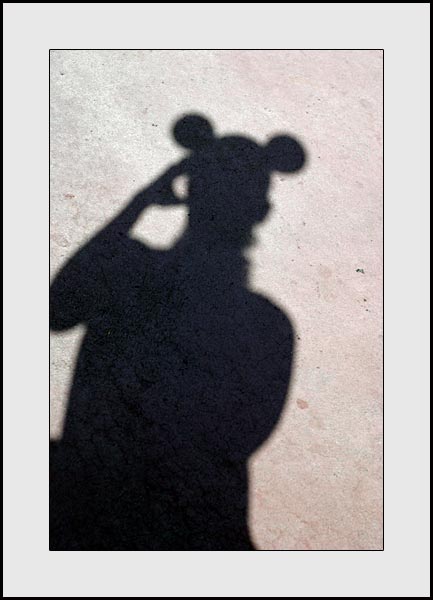 I decided to carry all of three of my lenses with me since I don't have one multi-purpose lens, and ended up using them all, so I'm glad I did.  I can definitely see a benefit to a large range lens though...I was wishing for an 18-200mm zoom several times just for convenience of not having to change lenses.  Instead of that huge investment, I decided to buy a camera bag from Sam's that was the perfect tote bag all week for all my equipment (as well as plenty of diapers, wipes and snacks!).