Octobers are going to be interesting.  Let me lament a little bit...I think maybe it'll be therapeutic for me.

While I'm very thankful for the awareness and fundraising and research all the pink brings to Breast Cancer, the truth is that I struggle with seeing PINK everywhere when I'm doing my best (at least this year) to try and put my breast cancer experience behind me and move forward.

The pink bows and pom poms and cute shirts and products are so good for awareness, but the joyful nature of all of it can be a little off-putting to those of us who have been hit directly by it.  It's most definitely a trauma trigger for me, that forces me to pause and reset my headspace, to remember that the pink is there because people care, not because anyone is trying to flash my trauma in front of me at every turn.

The flood of pink reminds me of all that was taken from me as I tried to maintain as much of "me" as I could while going through treatment. It reminds me that recurrence will always hang over my head.  The pink reminds me of people I know and was close to who died because of this disease. 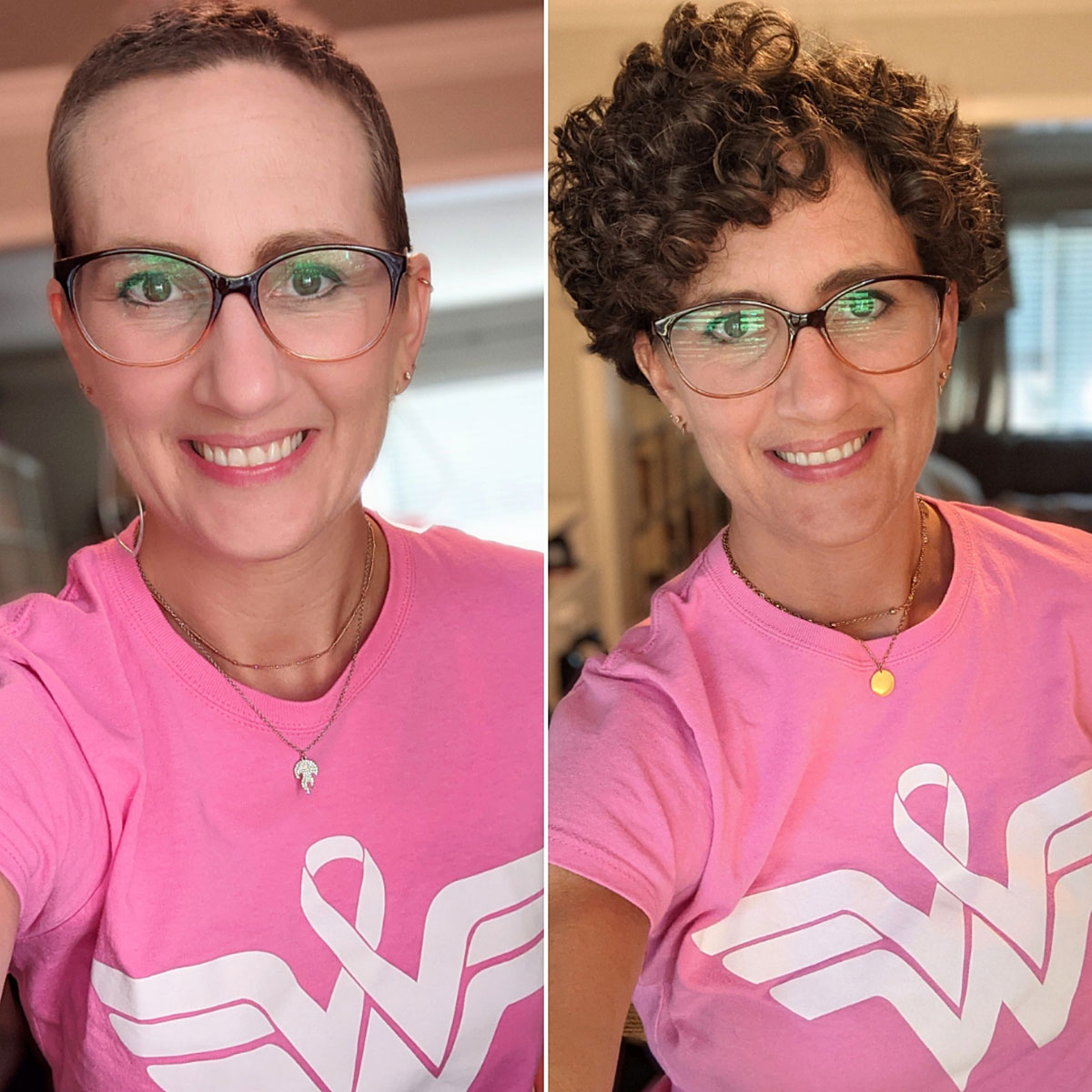 When I look at the picture on the left, which was taken last year in October 2020, just after I finished chemotherapy, I want SO BADLY to be more proud of where I am in the picture on the right, which was taken this October.  I want to see "recovered" and "healed" and "whole".  But, instead I see a tired, worn down, hurting, angry, and less hopeful person than I once was.

The truth is, I was in much better shape both mentally and physically last October than I am this year.  Even though last October, I had just been through 14 weeks of chemo in the middle of the Covid pandemic, suffered through my father passing away from cancer, and caretaking for my mom while she was in the hospital.  What could possibly be harder than all of that, I thought?

But since that photo was taken last October, my body has now been through three more surgeries, two were cancer-related and one was for my elbow injury (the first was incredibly difficult, the second much easier, and last has not gone as well).  A week does not go by when I don't have a doctor's appointment of some sort to arrange the rest of my responsibilities around.  Every single day is a constant evaluation of how I feel, what I'm capable of, and what I'm NOT capable of.

The "normal" that I thought I'd be able to return to when all of my treatment was finished just doesn't exist anymore, and I haven't successfully let go of that expectation.  The capacity I have to be involved in all the things and people's lives and activities that I used to be a part of, that brought me joy and gave me purpose, is so significantly and disappointingly diminished.  I just don't have the space for all of it, physically, mentally or practically. It feels like over the past couple of years my world has been forced to shrink considerably down to the bare minimums of health maintenance, work and carting kids around--and I think maybe that's been harder for me to accept than anything else.

I miss all the extra--the fun, the energy, the excitement, the wonder, the events, the get-togethers, the relationships, and the activities.  Those aren't all gone--you can look at my Instagram and Facebook feed and see that there's plenty of things happening in my life that are fun and social and enjoyable and good.  But my anticipation and participation in them has had to change.  Instead of excited anticipation, I have to "fuel up" and reserve energy and say "no" to a lot of things I'd really like to say yes to.  (Are you familiar with the Spoon Theory?)

I don't know if that's permanant, or maybe I just haven't recovered yet from all the things and need more time.  Perhaps I shouldn't have expected to be "fine" yet. I just don't have as much bounce in my bounceback as I used to have.  I guess that's normal and reasonable--in fact, I'm sure it is. It's what I'd say to anyone else telling me the same thing.  But internally, it feels like a concession.  Like giving up.  Like being forced to accept myself as less than I think I *should* and *want* to be.  And clearly I don't do that well or happily.

My body refuses to heal from this last surgery.  My mind is often clouded and cynical--or just numb.  My spirit is tired of fighting and believing and hoping for better.  I spend everyday writing about and encouraging other women to take care of their bodies, to believe in themselves, and in what they can achieve and overcome, and yet, I'm wallowing in disappointment because my body and mind won't cooperate with what I think I deserve and am trying to achieve for myself.

I regularly ignore or get angry at this post it note I leave up in my office, posted right in front of all my upcoming labwork, doctors appointments and paperwork. 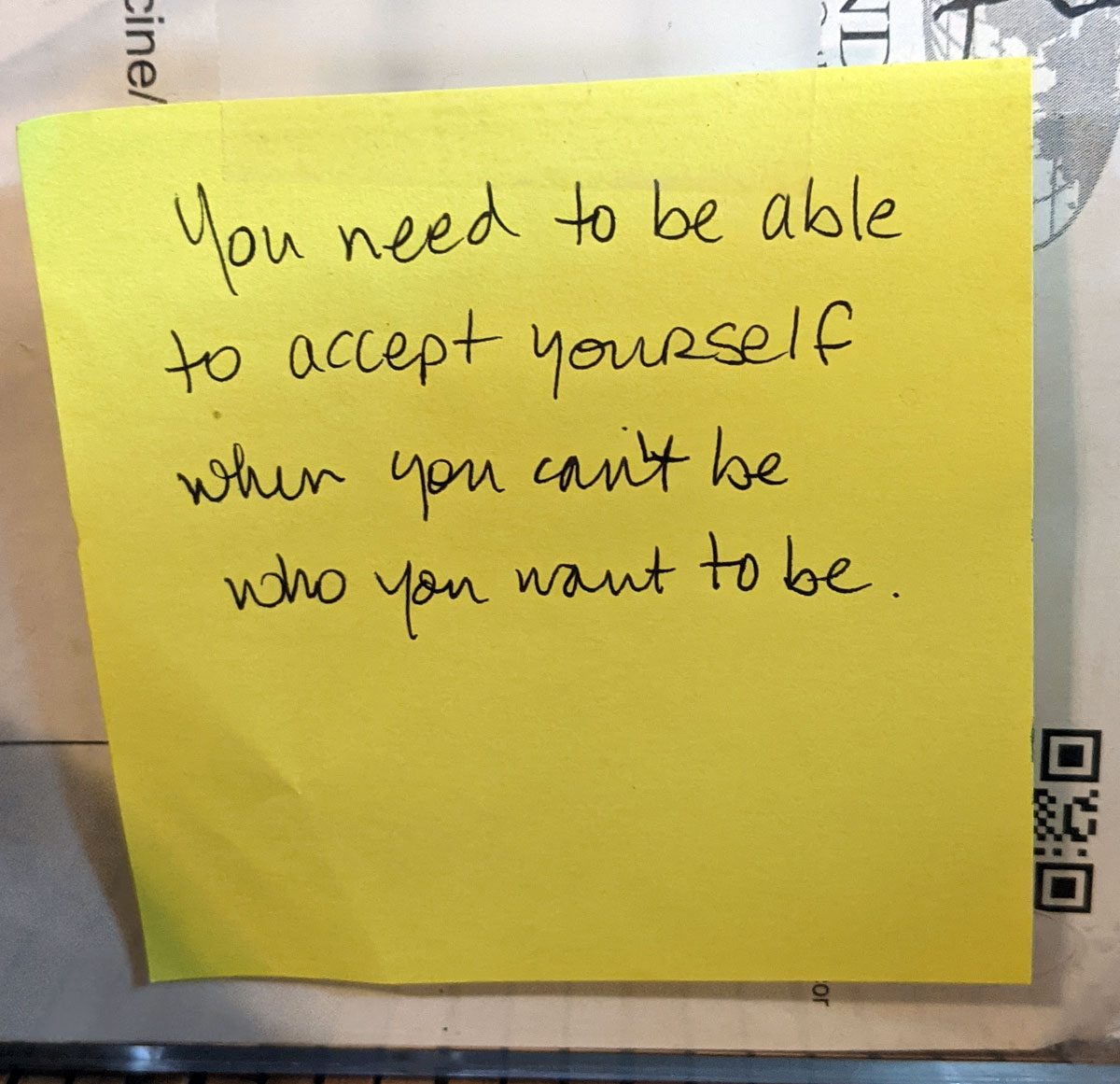 I don't know if I'll ever truly learn the lesson. I haven't yet.

Obviously, "pink" is not my problem...but more what seeing it brings up for me that IS the problem. It reminds me that I don't have as many spoons each day as I used to (seriously, read the Spoon Theory).  It reminds me of all the trauma I've experienced over the past few years, not just cancer related.  And it reminds me of the loss and disappointment that came with all that trauma.

I would love to be the face of encouragement and positivity, fight and success, especially in October--but today, I'm just not there.  Maybe by next October...

I appreciate you reading my lament, listening to my wailing heart, and maybe even relating to some of these feelings.  It's taken me a long time to find the words, name the feelings, and be ready and willing to publicly express how I've been feeling in the aftermath of all of this, so I do it tentatively.  But, it's a continuation of the story I started to share a year and a half ago.  I feel like being transparent and honest throughout the journey might be helpful for someone else, somewhere--and maybe then they can cope better than I've been able to lately!

Andrea,
I was listening to a motivational podcast and thought of this post. The podcast is from Ed Mylett-here is the link.

Many good things in it BUT where I thought of you was Mel Robbins theory of a High Five.She has a book named "The High 5 Habit" which explains it more. I am not sure you need the book if you listen to the podcast although probably helpful. It likely has more of the background & stories.

Basically you give yourself a high 5 everyday. It is a celebration of you! (not your accomplishments).This practice gives you a new perspective.
I only listened to this today so have yet to try it but I have nothing to lose. The podcast is over an hour but was worth it. Just a thought!
Love ya
jan

Your words deeply touch me. So real.