Getting ready for a 12 day trip out of the country, while the kids are still home and in school is nothing short of a monumental feat.

Ben and I have been planning this trip to Israel for several months to attend my cousin's wedding and tour the country, but the two weeks leading up to it were consumed with getting all *we* needed ready to leave the country and spend a week traveling AND preparing the kids, the house, and my mom for a week at our house without us.

I spent every waking moment trying to think of everything my mom would need to know (that Ayla couldn't answer for her) in order to allow her to take over both mine and Ben's role in the house for over a week.  In retrospect, it would have been so much easier to send the kids to Las Vegas!  Instead, I made Mom a manual for how to be "ME" and wrote down specific day-by-day schedules, routines, contact numbers, and instructions for her to reference while we were gone.  Thanks to that, and some helpful friends who contributed to carting Ayla to and from school, I think we did the best we could to make it easy for her!

But not without some forthought -- Just the instructions for how to work the television required a full page of step-by-steps! 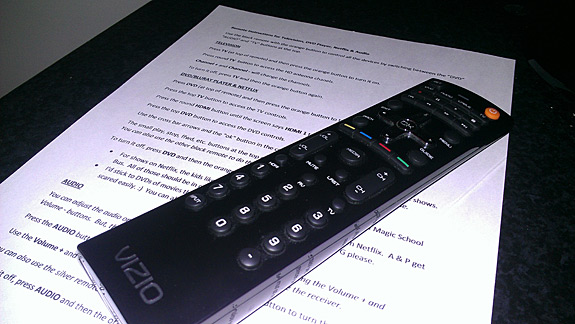 But, if anyone can handle it, Mom can.  By the time her plane arrived, I tried to have the house cleaned up, the manual ready, and everything prepared for her to take over.

Several people asked me if I thought she would actually *follow* my instructions.  Um, yes...as you can see in the photo below (taken as we got ready to go out to do some carpool duty with our cross-body purses & drinks-on-the-go) we tend to think alike.  I think she was very glad to have my manual - tucked under her arm! 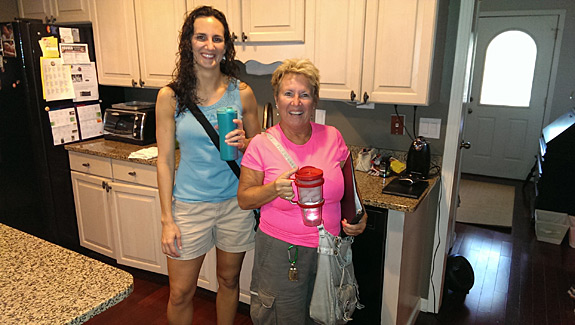 Unfortunately, even with all that prep, we had a few inevitable hiccups before we could head out of town.

First -- Ayla came home from school on Wednesday complaining about an itchy head.  Fabulous.  We got to do a full-on lice treatment -- the works: special shampoo, comb through each strand, wash all the sheets, quarantine stuffed animals, etc.  And we hadn't packed yet.  So that made for a late night on Wednesday for everyone - and resulted in complete chaos in what *would* have been a calm and clean house.

Then -- We spent a long time Wednesday night packing and repacking our luggage, since we found out that our carry-ons could only be 17.5lbs on Alitalia's flight.  Since I had planned to fly with ONLY a carry-on suitcase (that by itself weighed 8lbs), that made my packing plans impossible.  I ended up using a smaller carry-on suitcase that is actually Ayla's (complete with colorful hearts all over it, and a kid-sized extended handle) so that it would meet the size requirements and I would have several days worth of clothes with me--just in case. I've had luggage not show up before.  Not fun. We did decide to check a large suitcase between the two of us, which made bringing a few luxury toiletries possible. That was nice. :)

Thursday, I spent the morning walking my mom through the morning routine, the carpool routine, and updating her on all the codes, passwords, and *stuff* she needed to know about the house, the car, etc.  Our flight to Chicago didn't leave until about 6:00, so we had most of the day to do last minute prep, which was nice.

Until, when Ben and Mom went to pick Ayla up from school, our car died and wouldn't start.  They had to have a friend jump the car to get it going, and we spent a frantic hour trying to charge the battery so that it could get us to the airport in time.

That's when I started getting one of those "everything is going to go wrong on this trip, and I'm about to leave the kids with my mom for a week, and we'll be essentially un-reachable, in a foreign country that is known for bombings and catastrophes" kind of feelings. 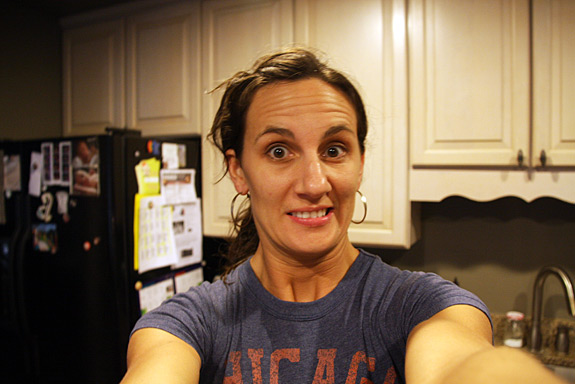 Thankfully, the car started on-command (and didn't have any trouble the rest of the week either), and we managed to make it to the airport in plenty of time.

Still...the ride there and watching the kids ride off with Mom to Paxton's swimming lesson left me with an uneasy feeling...out of my hands now! 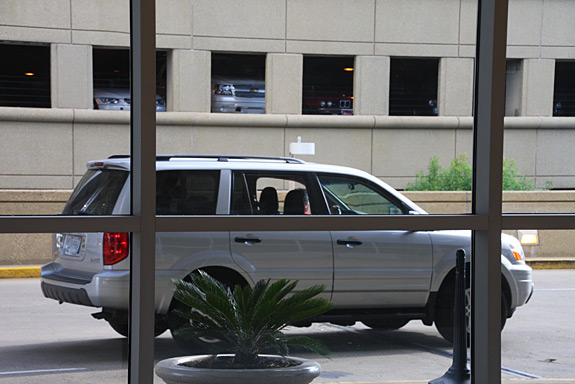 I knew they'd be fine, but I also knew that a week in charge would be hard on Mom (since it's hard on Ben and me, and there are two of us!).

We went through our first round of security (which we got good at by the end of the week), and found some dinner at an airport restaurant.  While we were in the security line, we both got several phone messages from my grandparents.  When I finally checked them as we sat down to eat...I heard a frantic message from my grandmother that went something like this:

"Andrea, call me back right away.  Our flights are all screwed up."

Here's a tip:  Don't fly with Alitalia.  Don't buy thier "cheap" tickets.  Don't even read the flight schedules.  If you do, you WILL regret it.  Don't say I didn't warn you.  It's not just our experience...others will agree.

When I did get a hold of Grandma, we found out that Alitalia had rescheduled our next day's flight from 3:30 in the afternoon to 10:00 pm at night, which would make us miss our connecting flight in Rome to Tel Aviv.  So, that would mean we'd have to spend the night in Rome and hopefully get on the next day's flight to Tel Aviv.  But...since this was a problem for LOTS of people on these flights (the same rescheduling affected Thursday, Friday & Saturday afternoon flights), it meant there wasn't going to be much space on those next day connecting flights. 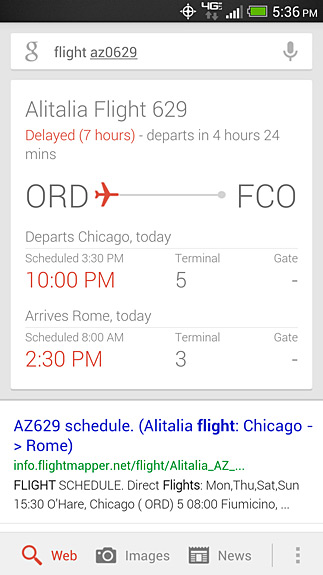 There wasn't much we could do, sitting in the Birmingham Airport, except hope that they'd get it all figured out.  Grandma didn't sound hopeful.  We just tried to be flexible and available to leave Chicago whenever necessary -- but first we had to get there. 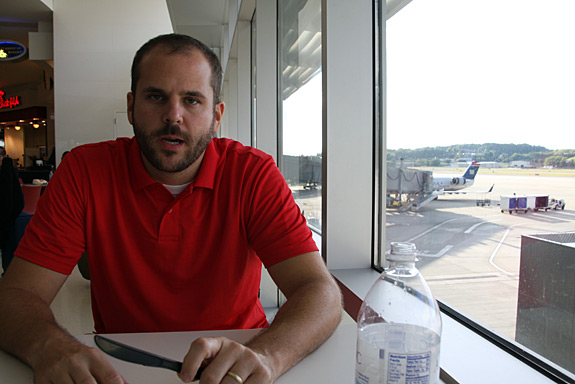 Once we arrived in Chicago (thanks to Daddy for picking us up!), Grandma still didn't have any more information, other than we *for sure* weren't going to leave before 10:00 pm on Friday.  So, we went to bed, and figured we'd just make the most of our Chicago morning, and see how it all played out.

Friday morning, my phone woke me up with a message from Grandma--

"We're totally screwed.  Call me back."

Grandma has a way with words. :)

Alitalia hadn't responded with any solutions to getting us to Tel Aviv in a timely fashion.  They offered to refund our tickets, which appeared to be the best they could do.  Grandma had looked at other airline options, but the price was significantly more than we had already paid for our tickets, she was exhausted, frustrated, and angry -- and *STILL* waiting for Alitalia to offer a better solution.  Grandma seemed to think the trip was about to be cancelled altogether.  Of course we wouldn't let THEM miss the trip, but it seemed doubtful that we could spend the extra money to buy more expensive tickets.

After a quick pow-wow, Ben and I decided that it was foolish to keep waiting on Alitalia, so we wanted to cancel that flight and get a refund.  But...it also seemed like a MAJOR waste and disappointment to cancel our trip altogether.  I mean, we had already gotten Mom to Birmingham, packed, traveled to Chicago, and done all the research for the Israel trip.  We decided -  it's only money - and called Grandma and told her we wanted to book some new tickets - regardless of the price.

We found a flight schedule through El Al Airlines that worked with our plans (though it put us in Israel a day later than our original plan), and allowed us to fly from Chicago to Newark to Tel Aviv, which meant that if there was trouble with connecting flights, we wouldn't be stranded in another country.  The bad news...the tickets were double the price we originally paid.  Oh well...we were gonna get to go to Israel!  Guess I may just have to run my Buy One, Get One Free Sign Sale this Christmas after all!

So that's what we did. Canceled Alitalia.  Booked El Al.  And spent a bonus day in Chicago...

As you can see from the little hiccups in our prepping, it became the theme for this trip: Things would NOT go as planned...but it would turn out just fine.