After our very fun trip to LEGOLand Florida over Christmas break, Ayla and Ben decided to write a letter to LEGOland to bring to their attention the ONLY disappointing part of our day -- There wasn't much LEGO Friends representation at the park other than a single shop, and LEGO Friends are Ayla's favorite kinds of LEGO. 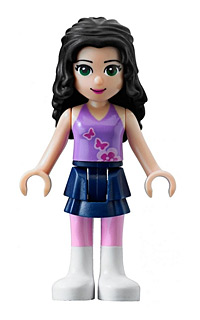 Her main frustration was that she wasn't able to trade a LEGO Friends minifigure with any of the employees like Paxton was able to do, because the nametags that the employees wear to hold their minifigures aren't able to hold the Lego Friends characters because of the way the Friends are designed. 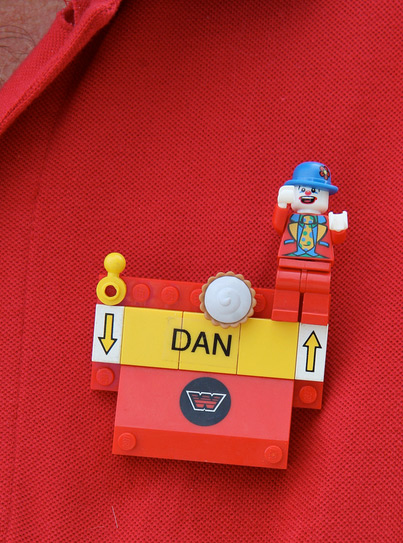 The regular minifigures attached to the front of the nametag, rather than the top, which is how the LEGO Friends characters would have to attach. 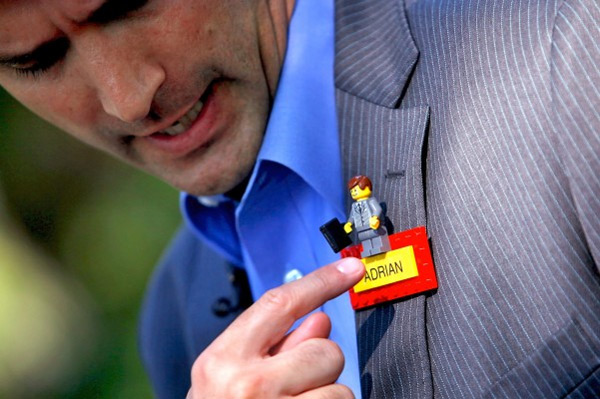 So, Ayla and Ben sent a letter.  Ben explained to her about how instead of just sending a complaint, it would be more helpful to LEGOLand and all the other girls who like LEGO Friends if she offered a solution to the problem. 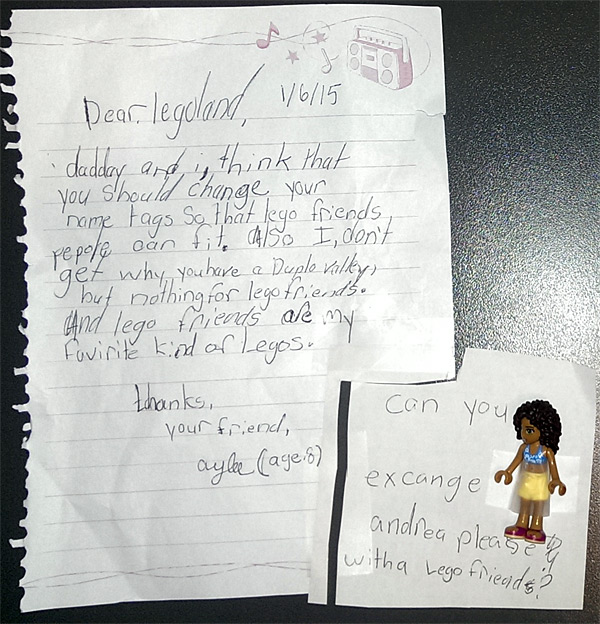 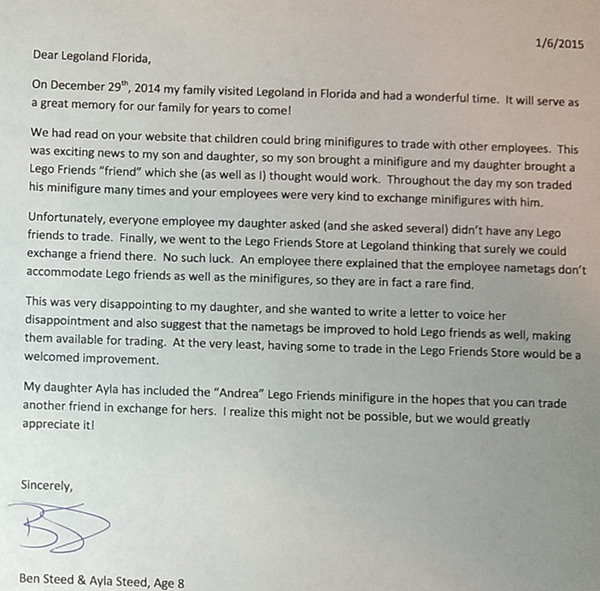 It never hurts to ask--and she understood that she might not ever get a response, but she wanted to try.

Today, we received a package in the mail from the LEGOLand team in response to her letter.  That's a pretty big package for a letter!!! 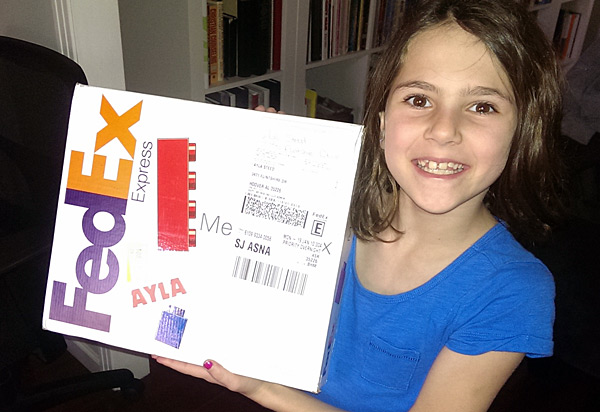 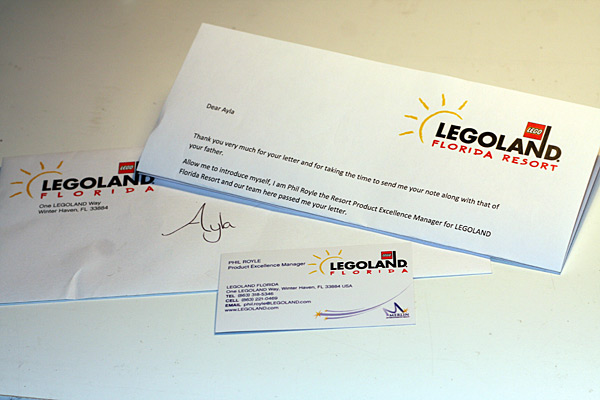 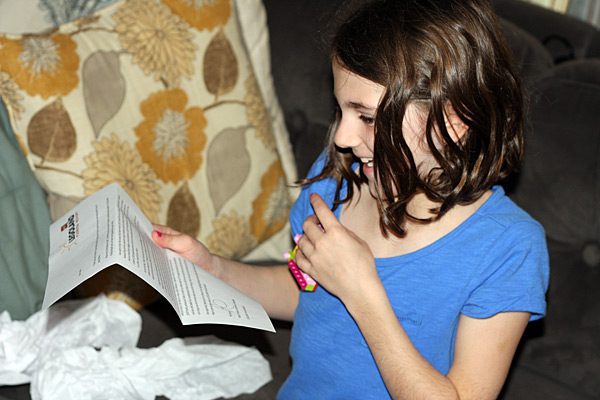 In addition to a personally written letter thanking Ayla for her suggestions, she received the "Andrea" Lego Friend character she had sent them AND an "Olivia" one to join her, a new LEGO Friends LEGO set to build, AND her very own LEGOLand Nametag! 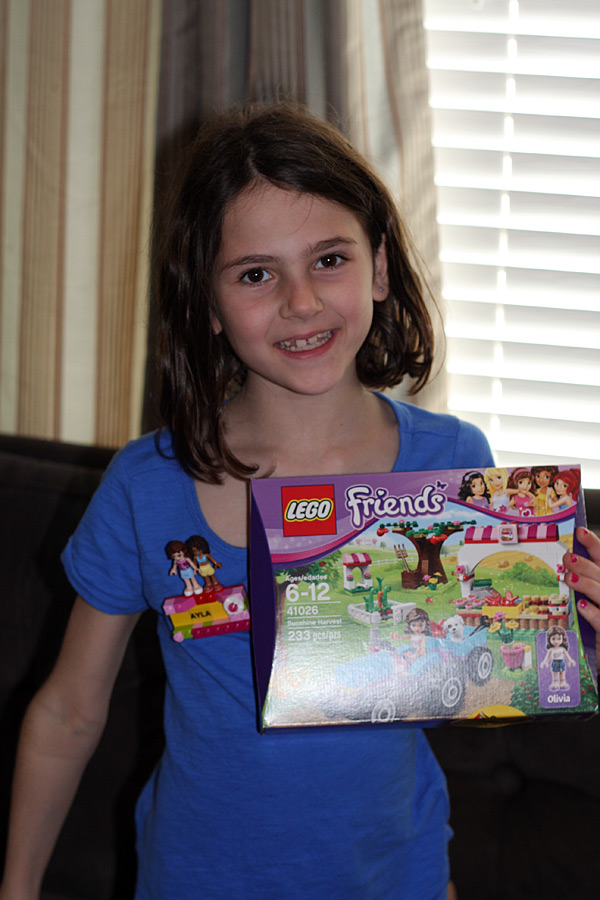 Notice how her nametag holds the LEGO Friends' characters?  It turns out, as a DIRECT result of Ayla's letter, they ordered 1500 pieces to modify the LEGOLand employees nametags so that from here forward, they'd be able to offer LEGO Friends characters in their minifigure trades! 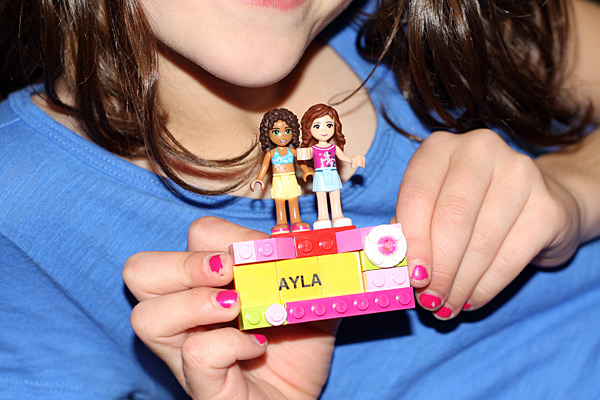 Talk about making a difference. :)

Even better, they told her they are in the process of building a brand new area at LEGOLand called Heartlake City, opening this summer and offered Ayla a VIP experience at the Heartlake Salon and an opportunity to meet Emma (one of the Friends). All that AND 4 tickets for our family to spend another day at LEGOland! 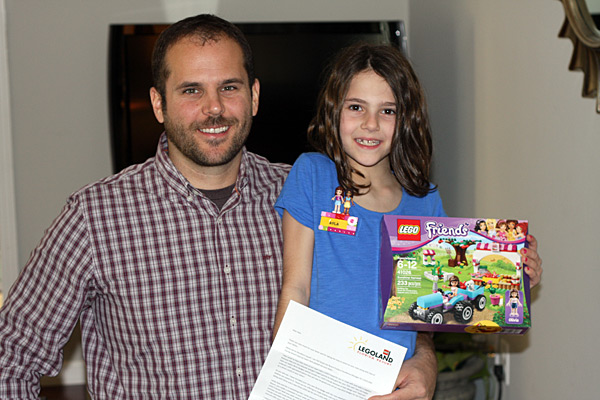 Wow.  I guess we'll be going back!  Thank you LEGOLand!  You certainly made her day!

So Much Catch-Up to Do! 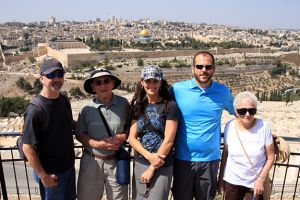 How cool! Congrats to all of you :)

Haven't made it to LegoLand yet, but we're right around the corner in Orlando. Loved seeing the pictures of the fun you all had!

very beautiful thing to have happen ....enjoy your next visit ayla and keep up the good work on making a difference we always need people like you in our lives ;)

That is fantastic! What a wonderful treat and lesson about voicing solutions rather than complaints. She won't ever forget this. Way to go mom and dad for helping her!

Ayla, we are so proud of you. How exciting that you have your own name tag! I bet Paxton is jealous of that. Nice lesson for all. Enjoy your next trip! Gramma Jan

Way to go Mom & Dad!! What a great lesson to teach Ayla. And good for Legoland. I guess some businesses haven't forgotten what great customer service is. Thanks for sharing!!

So Much Catch-Up to Do!