On New Year's Eve last year, Ben and I made a future-friendly and space saving purchase.  We bought three boxes worth of photo scanning from ScanMyPhotos.com.  We took advantage of a great sale and got one box free, but it was still a good chunk of change at $368.00.  Merry Christmas to us! However, when you consider that fact that we crammed 2,255 original photos spanning about 34 years of memories into just one box, and now they're all preserved digitally and backed up in several places -- I think we got a steal!

We bought the "Prepaid Photo Scanning Box" at 300dpi.  We could have upgraded to 600dpi if we thought we'd do much enlarging or printing, but mainly, we just wanted to have digitally viewable copies of the pictures for browsing on our computers, tablets, phones, etc., adding them to blog posts, emailing, and so on.  So, 300dpi seemed like a sufficient choice.  Plus, we can still reprint them at their original size with no problem, and even the 3.5" x 5" photos can be enlarged to 5" x7".

We did not add any additional upgrades (like photo restoration).  We can do that on our end if necessary with PhotoShop or on a photo-by-photo basis.

It's not an easy feat to get photos ready to scan.  Well, that's not true. It's easy, just time consuming.

Paxton's closet is full of about 20 photo boxes and large plastic bins full of pictures, many of them ours, most of them my mom's, but that includes my childhood, so I claim most of those boxes!

For this first ScanMyPhotos box, we focused on including photos from each of our childhood's through our married life (pre-digital camera).

We'll probably fill one of the other boxes with photos from Ben's parent's house to get more of his and his brothers' childhood and family ancestry, and I'll probably fill the third box with more photos from my mom's photo boxes that include more pictures of Jake's childhood and Mom's activities (since I skipped over those for my first round that was -- All.About.Me.)

We took about 2 weeks and spent the evenings in front of the tv (actally, one of those weeks was when I was doing a No Media fast, which gave me lots of free time to work on it!) to go through photos.

We tossed duplicates, blurry photos, and totally irrelevant pictures.  That was hard.  I can throw away just about anything, but throwing away pictures was hard.  We did it though! And narrowed it down to 2,255 pictures.

My photos came mostly from my mom's photo boxes. It was kind of painful to pull them all out of the nice and neat and organized boxes that had been so carefully labeled with dates, locations and names.  We had to sort them by photo size, not content when we got them ready to pack into the box.  So they ended up all mixed up.  Ouch.  That was hard.  Will I put them back where they came from? I dunno.  Maybe.  Maybe not. Either way, I know we've reduced the number of photo boxes in that closet by about half, just by throwing away duplicate prints.

The good news is, most people don't have that nice and neat and organized system - so it's just a matter of collecting photos from all over and putting them into like-sizes, and then packing them into the box - like this:

Then you ship them away -- another completely stressful element of the process.  You pack your entire history away into a box, tape it up as best you can and then just pray and hope that they arrive at their destination safely.  All this stress and work is in the name of preserving the memories, but if something happened to this box...they'd be gone forever...

I literally almost threw up when I dropped the box into the post office package drop.

I recommend getting insurance and tracking on your package.  I forgot to and had a near panic attack when I realized it.  Thankfully, the online chat support at ScanMyPhotos was able to confirm that they did in fact receive my package (their confirmation email sent that same day was caught by my spam filter), and my photos were safe and ready to be processed.

Whew.  My nervous breakdown was avoided.

Then you wait.  It takes about 4-6 weeks for them to scan all the photos and ship them back to you.

Several weeks later, I received an email letting me know when they shipped the box back to me via USPS Priority Mail (with a tracking number).   It wasn't nearly as stressful to have it shipped back to me, because I know that they keep a backup of all the digital files for a while.  So if the box disappeared...at least the digital files could be recovered at this point.

And here's what all that work resulted in...a DVD full of ALL those photos!  I immediately put the images onto our external hard drive (which is backed up nightly via Carbonite), and now I can rest easy, knowing that all those images are safe and accessible!

One of these days I'll probably sort through the images and put them into chronological order in labeled folders on my computer, so they'll be easy to find.

Cool, huh?  Wanna see some of the photos?

I mean...this stuff should not be forgotten. It's good stuff.  And now it can live on forever!

Bite the bullet.  Do it.  Have your photos scanned. I'm going to spend this weekend putting together another box full of 'em.  It's so worth it! 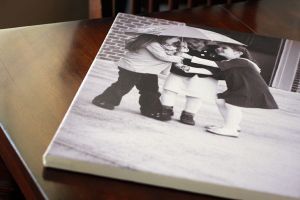 That’s a great story … I’ve used the same company in the past and had similar results. The one I use mainly now is Memory Fortress in Georgia, they are really fast and best used on the big jobs. We sent over 10,000 photos off, along with some slides and videotapes, and we got everything back (more organized than we had sent it) in under two weeks. I think the photos averaged about 15 cents per image, so it was a great deal.

What a great idea! This may be a little bit of a weird thought but my parents had a nasty divorce and to this day my dad is still sad that he did not get any of the pictures of my sisters and I when we were younger. I think I may do this as a Christmas gift to him (luckily we'll only need one box probably)!

Wow. Who knew? I think I'll have to think about this. What an awesome thing to have done. Thanks for sharing this useful idea.

I have a box I'm working on to send off. I'm not sure if it's that company in particular, but same idea!

I would have been freaking out about mailing all those pictures also. So glad it worked well and you have them on back up! Thanks for linking up with tip-toe thru tuesday.

What a great idea!

What a relief that must have been for you to have someone else do that for you!