I'm in the middle of a 7 week experiment inspired by the book 7 - An Experimental Mutiny Against Excess by Jen Hatmaker. I'm calling my journey 7 Weeks of Less.  I'm one week in.  Read on to see how it's going - and join me if you'd like!

Rather than choosing only 7 foods to eat this week, I've decided to eat only from what we have, and not buy more.  This means no eating out,  no picking up bananas or flour or eggs, bread, etc. from the store and no accepting food from other people.  Instead, I'll be eating food from the pantry, refrigerator and freezer that we have in the house right now.  This would have been easier at the beginning of the month when we had recently been shopping.  However, we have not been shopping in a week or so and *are* currently out of several things, so I imagine I will have to sacrifice plenty.  In fact, I think we're almost out of coffee.  That's serious.

I also will not eat any food after 8pm.  Liquids only.  The snacking fool in me will surely feel this sacrifice.

In addition to not eating anything we don't already have and not eating after 8pm, I'm going to be in charge of dinners this week, which is not normally one of my jobs on weekdays (yes, let's all do a GIANT cheer for a husband who cooks).  But in an effort to not force Ben & the kids into my experiment, I will come up with and cook dinners this week instead of forcing Ben to consider my experiment before planning meals.

*Note - I will replenish food for the rest of the family if necessary, but won't let myself partake in those items.

So, this week of "food fasting" hasn't been as hard as I thought it might be.  I probably should have made it harder.  I always had plenty to eat (even though it was mostly rice, chicken and spaghetti.)  Although I haven't been truly hungry at all this week, I have noticed several things:

This week's experiment is a good reminder that even if I don't think so, I deal with excess food all the time.  Even when I think the choices are so slim I won't be able to find anything, there was always more than enough food to eat and I was never hungry.  It means we always have enough and can always share what we have.  And we could probably save a lot of money on food that we don't really need -- just really like and want!  Instead of feeling entitled to refill and buy and eat anything we desire, it was a good exercise to eat what is available and not focus so much of my day on what I'm eating.

I've found that just the action of making these rules and boundaries forced me to think about what I was eating, why I was eating it, and whether it was beneficial.  Just setting those rules helped me think more about other people, about the world around me, and was a tangible reminder to be thankful for what I have.

Here's my day-by-day journaling from the week - though I'll warn you...not nearly as entertainting as Jen Hatmaker's book!

While sitting in bible class after worship this morning, I realized that there were almost 7 weeks until my annual summer trip to Chicago.  Since I've been thinking about the book 7 and trying to figure out how to apply it, that seemed like a direct message from God to use these 7 weeks as my own experiment inspired by Jen Hatmaker's book.  I borrowed a sheet of paper from Ayla's notebook and scribbled some notes about how I might make it work and spent the afternoon jotting down my plans.

Starting today, I'll focus on food for a week.  I'll think about the food that people around the world don't have, can't get, and how often people go hungry.  I'll eat only what I already have, share what I have, and refuse the oh-too-easy-temptation to just "pick something up" or refill what's empty.  This could get harder here at the end of the month when the coffee is running low, there's only a box or two of cereal, and there's no bread in the house.  But I know it won't compare with the sacrifices others around the world have to make every day when it comes to what they can eat.

Today wasn't hard as far as food goes -- cereal and coffee for breakfast, baked potato with broccoli, corn & cheese for lunch and spaghetti for dinner.

I also decided to add a rule - No eating food after 8pm.  Since that's when I usually snack non-stop till bedtime, that could break me...

Today wasn't hard at all - though Ben tried to tempt me by taking Paxton to McDonald's for lunch and asking for me to bring home donuts and pick up ice cream.  He was teasing about the donuts and ice cream.  I didn't get them.

I made a list of dinners that we can make with food already in the house.  Doesn't look too bad at all.  Especially since our freezer is stocked with steaks, ground beef and pork chops from our recent purchase of a local cow & pig.  Breakfasts, lunches & snacks will be a little harder.  Especially with no late-night snacks allowed!

Today was not hard.  At all.  Even when Ben talked on and on about how he wanted to go and get a donut from Shipleys and a corn dog at Tucker & Easton's ballgame tonight.  I just wasn't interested -- and I had plenty to eat all day:

Evidently we have more food in the house than I thought.  And bonus! I've lost 2 lbs this week already, which attribute completely to not eating after 8pm.  Perhaps this is the calm before the storm?  It almost feels like I made this fast too easy.

Totally unrelated to food, today I was cranky, off-kilter, and just not right -- which made me *want* to eat food--and lots of it.  Thank goodness for blueberry muffin mix (thanks Ben, for having those in the oven when I came home from the Rec today), and leftover Mexican chicken and rice.

Today we finished off the regular coffee.  I'll be drinking decaf the rest of the week.  Such sacrifice.

I went grocery shopping this afternoon and felt a bit like the "help" who has to do all the shopping, but doesn't get to eat the treats--cheese its, kettle chips, eggs, milk, bread, hot dogs, ice cream, bananas...  Now there's a no-no shelf in the pantry that I'm not allowed to touch until Sunday.   As I was adding things to the cart that I *couldn't* enjoy (yet), I was reminded of how many people don't have the luxury of just buying what they want to eat...whenever they want to either because of availability, money or circumstance.  I live a couple of miles away from the largest Target in the world and don't even have to take any major roads to get there.  Talk about a massive convenience and luxury.

As a side note...I spent $100 at Target on "fill in" foods and plan to make a big trip to Aldi early next week for our regular monthly grocery shopping (usually around $200).  It's those weekly fill-in trips that add up though -- and that doesn't even count eating out!  I know there are ways you can coupon, plan meals and shop at several different stores, but frankly that's a lot of energy and time spent on meal planning that I don't really have.

In our house, we choose to "save" on groceries by shopping monthly at Aldi and Sam's Club for most of our food, and then we shop at Target to fill in for things like milk, eggs, veggies, & fruits that we go through more quickly (using our Target Red Debit Card that gives us 5% savings and gives 1% to Ayla's school).  We really should start using more of the coupons from Target that are printed for us each time we visit and do a better job of remembering our reusable shopping bags...which saves a nickel per bag per shopping trip.

Out of milk.  Ate 2 eggs for breakfast.  Coffee is gone.  I drank decaf.  I also took two naps today.  So tired.

Ben expressed his frustration with my experiment, because he has been avoiding eating certain things so that there would be enough left for me to eat and he has to try not to make meals including things I can't have, or else we just have to make separate meals for everyone.

Was going to make pancakes for breakfast.  Needed milk & two eggs, but only had one.  Ate 1 egg for breakfast instead.  Lunch was leftovers - Mexican fajita bowl, but I had to wait until we got home from the zoo to eat, since I didn't have any packable food to take with me.  The kids ate packed lunches at the zoo.   For dinner I ate the last of the fajita bowl ingredients.

I ate the last packet of oatmeal in the house (which has been in the cabinet for MONTHS) for breakfast with raisins.  It was actually pretty good.  For lunch I had to bypass the pasta salad, hamburger buns (thankfully I could still eat a hamburger), and strawberries.  Instead I had a bag of frozen vegetables and a hamburger with no bun.

So now I'm on to week 2 - STUFF (getting rid of it mostly).  And I confess, I'm so excited about this week that I started a day early!  Tune in next week to see how much junk we can get rid of in a week! 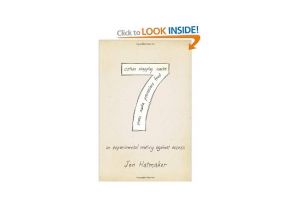 Oh my girl - you so ENCOURAGE ME. I loved hearing of your wrap up. I'm just beginning so I needed the assurance it would be OK and daily lessons will be learned. So thankful you are with us in this crazy journey!

Looking forward to reading more of your posts as you go through the challenge. I'm excited for the purging of the possessions too. I start my Summer of 7 tomorrow with STRESS.

Okay, I'm a dork for bugging you like this, but I want to make sure your AWESOME posts are going in the right hop, so other people can read them as they do the food challenge. We have a separate hop for each challenge, so check out the Food Hop here: http://www.thepoorganiclife.com/the-summer-of-7/food :)